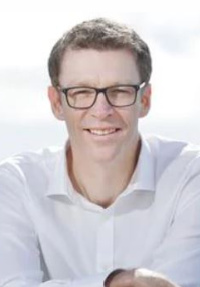 Drew Ginn has over 20 year’s experience as a presenter, facilitator of programs and workshops, 1 on 1 coaching and mentoring. Drew’s unique sport and business background provide him with a practical set of skills and experiences from over 30 years in high performance sport which he draws on to engage with clients and participants in areas of leadership, team development and peak performance.

In sport Drew has a background in Rowing and is Australia’s most decorated Olympic rower, having won three gold medals and a silver medal in four Olympic Games. He was the new young member of the “Oarsome Foursome” in 1996, and during his sporting career has been crowned world champion five times.

He was awarded the highest honor in international rowing in 2014, The Thomas Keller Medal for his contribution to the sport of rowing. In 2018 he was inducted into the Sports Australia Hall of Fame. Drew had a 16 year International sporting career with many highlights but also significant setbacks and challenges in the form of two major back injuries requiring surgery and long recovery period. While as an athlete in rowing he began his working career as a facilitator, coach and business owner which ran parallel to his sporting endeavours from 2001 onwards.

Since 2012 Drew has develop a career in sports management. His career in sports coaching and management began as he transitioned from athlete to National Head Coaching for Rowing Australia. He has also been Director of Rowing at a Melbourne private school. More recently he has held roles as the High Performance manager for Cricket Tasmania and Executive General Manager at Cricket Australia.

As a lifelong learning, Drew is passionate about building on his personal sporting experiences and building his knowledge through his career in sport management while continuing to explore keys areas like leadership, teamwork and performance to help those he works with to achieve their goals and overcome their challenges.

Drew is a great facilitator, he has a way of relating his lessons to anyone. We are a young and growing team and Drew has been instrumental in helping us build a strong team culture, by helping us learn more about each other and providing us with the tools to help us communicate effectively.

Drew is a highly talented and skilful facilitator. He is able to inspire and motivate groups to confidently work toward the achievement of high performance goals. Drew’s high energy presentations, authentic personal narrative and articulate delivery make him outstanding in his field. Groups consistently rate him as 10/10 and most importantly are profoundly impacted by his practical approach to more effective Teamwork and goal setting. Drew’s ability to link his impressive sporting history to the corporate world in a relevant and meaningful way, give sessions he leads a unique and memorable edge. I would highly recommend Drew Ginn as an outstanding Facilitator/Presenter.