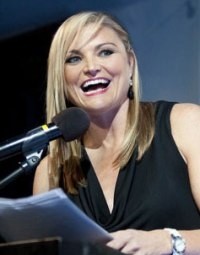 Melinda Gainsford-Taylor is one of the truly great runners of Australian athletics history. Melinda is a three time Olympian and is the current Australian Record Holder in the 200m. Melinda also held the Australian Record in the 100m, for some 20 years, until it was recently broken by Melissa Breen.

As popular with the media as she is with the greater public, Melinda’s relaxed and endearing personality, combined with her professional approach, make her a delight to work with.  Melinda is a successful media commentator and is an ideal choice as an MC or guest speaker inspiring audiences by sharing the challenges and successes from her international athletics career.

Melinda has adapted her learnings as an athlete to that of coach assisting corporates in developing strategies in goal setting and providing management with techniques to inspire and motivate their staff.

In the 2017 Australia Day Honours List Melinda was awarded a Member of the Order of Australia (AM). For her significant service to athletics as a sprinter, at the national and international level, and as a role model for young athletes.

Melinda is an ideal choice as a guest speaker for those looking for someone who has worked hard to achieve at the highest levels whilst being able to relate her approach to success to a broad range of subject matter and issues.

As a corporate guest speaker Melinda is engaging and insightful as she shares both the highs and lows of her career, providing the listener with inspiration to deal with their own challenges in life.

In addition Melinda is committed to coaching and mentoring athletes through her group sessions. Encouraging kids to be their best and lead a healthy and active lifestyle.

Melinda is an experienced MC having hosted numerous events over the years for her sponsors, sporting bodies, corporates and the media.

Being a country girl at heart, Melinda’s down to earth, unaffected and natural demeanour offers a perspective of success that is not often seen today.

Melinda has a remarkable ability to command a room with her story of hard work and sheer determination to become a champion in her chosen field and a much-loved media personality. She makes you feel like you were there with her through all the highlights and disappointments - a true champion in her career and spirit.

I can only speak highly of Melinda Gainsford-Taylor as a person, a speaker and as a workshop presenter. She is entirely professional, but natural and grounded in her approach. Melinda was an absolute ‘hit’ at our recent Small School’s Conference - her knowledge, content, skills, personality and general approach were outstanding!

Melinda was fantastic and the feedback that I have had from the girls has been overwhelming. She really was an inspiration to all of them.