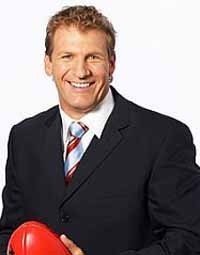 Michael Christian offers a unique set of media skills and experience to compliment his successful football career. A key member of Collingwood's drought-breaking 1990 premiership team, Christian has made a name for himself in finance, radio sport and horse racing while forging a reputation as a leading AFL host and commentator.

This sporting/business combination makes Christian a versatile option for events requiring an MC or keynote speaker. With a broad knowledge base in both sport and business, Christian is an entertaining, balanced and witty presenter. In 1997, Michael commenced a five year stint with ABC Radio as an AFL host and commentator.

In 2002, Christian’s talents behind the microphone were recognised when he became a foundation member of Channel Ten’s AFL coverage. He has been a mainstay of Ten’s excellent broadcasts of the nation’s biggest sport. Christian has again displayed his vast array of talent by providing accurate, insightful and exciting calls of AFL games, hosting Saturday night program The Fifth Quarter and MC’ing the traditional start to AFL Grand Final Day, the North Melbourne Grand Final Breakfast.

The same year saw Christian join Triple M, where he spent two years at the forefront of the FM station’s week-to-week coverage of AFL. In 2004, Christian moved to Breakfast radio as host of Sport 927’s Prime Time Sports. Broadcast to a large audience across the National Racing Network, Christian has been able to showcase his broad base of sports knowledge on the show which airs from 5.30am until 9am weekdays. He also calls football for K-Rock radio (Geelong).

In 1988, he embarked on a stock broking career joining Bain & Co, Stockbrokers (Deutsche Bank). In 1992 he was poached by BZW Stockbrokers (ABN Amro) where he worked for the next 10 years ultimately becoming Head of Global Sales – Australian Equities. He resigned in 2001 to pursue his passion in sports broadcasting.

Christian is currently an Executive Director of an Australian leading multi-media thoroughbred horse promotion and marketing organisation. He has a great passion for and is intimately involved in the thoroughbred industry. His interest was sparked in the early 1990’s as a racehorse owner. He has enjoyed racing success with horses like Phoenix Park, Slavonic, Roedean and Dynamic Tycoon. His interest saw him take part-time roles as a racing manager and racehorse syndicator.

In 2003 Christian completed a Diploma in Horse Breeding. The Diploma exposed Christian to all aspects of thoroughbred horse breeding and he has recently put his study and philosophies to work embarking on his own breeding operation, Saconi Thoroughbreds at his 40 acre thoroughbred property in Whittlesea, Victoria.

With over 20 years of continuous involvement in elite sport as an athlete or broadcaster, Christian has been in demand for speaking engagements or as a Master of Ceremonies for a wide range of organisations.