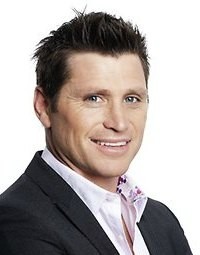 One of the AFL’s most marketable players throughout a successful 16-year career with Hawthorn, Shane Crawford is one of the few players who has made a seamless transition into life in the media full-time. Having had a long association with Channel Nine as a key member of ‘The Footy Show’, ‘Sunday Footy Show’ and more recently ‘Postcards’ and ‘KidsWB’, Crawford continues to have a major role on both programs as well as across several other shows following his retirement from football at the end of 2008.

On-field, Crawford’s 305th and final AFL game saw him finally taste the ultimate success, with the Hawks’ 2008 triumph providing him with one of the most well deserved Premiership medals any individual has ever received.

At the start of 1999, Shane was entrusted by Hawthorn with the captaincy. He led the young Hawks to Ansett Cup victory in the pre-season, before a season of individual brilliance saw him win the Brownlow Medal, his second Club Best and Fairest, All-Australian selection and scoop the pool in the media awards.

After leading the Hawks to consecutive finals series in 2000 and 2001, Crawford returned to his best, winning the club best and fairest in 2002 and 2003, All-Australian selection in 2002 and narrowly missing winning his second Brownlow in 2003. In all, Shane was a four-time Hawthorn Best and Fairest winner and All-Australian, placing him in a rare class of superstar. The flair, hard work and excitement that encapsulated his career as a player will no doubt be the theme throughout his time in the media, factors that will see him continue to have a special connection with the public.

In 2010, he displayed the ultimate show of dedication and generosity when he embarked on his journey ‘That’s What I’m Walkin’ About’, an 11 day ultra-marathon from Adelaide to Melbourne raising $500,000 for Breast Cancer Network Australia.  In 2013, has raised more money for the Breast Cancer Network of Australia, riding from Melbourne to Perth a distance of over 3700 km on the “Tour De Crawf”.

A fun and entertaining personality, Shane Crawford is able to engage a wide-ranging audience. He was in the Australian “Celebrity Apprentice’, and been a radio announcer on Triple M’s AFL coverage, as well as a columnist for the Sunday Herald Sun.  Shane and long-time colleague Glenn McFarlane produced his autobiography, That’s What I’m Talking About”, and later a series of children’s books under the title ‘Kick It To Nick’ followed in 2013.

A devoted family man, Crawford lives in Melbourne with partner and their four sons.