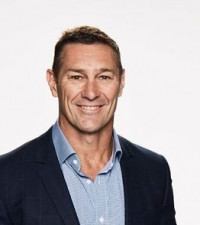 He is acknowledged as one of AFL’s greats, with a career that spanned over 17 years and consisted of 306 games.

Alastair’s career began in Tasmania and it was split between, Fitzroy and the Brisbane Bears/Lions, playing for six and eleven years respectively. He was a powerhouse full forward and an All Australian fullback.

In 1995, he suffered a career threatening illness which was later diagnosed as Chronic Fatigue Syndrome (CFS). Not only did he return to the game after only playing once in '95 but he became an inspiration to those who also suffered from the condition.  Feeling inspired after a potential end to his football career, Alastair brought an entirely different outlook to the sport and played some of the best games as the oldest player in the competition.

In three consecutive years, 2001, 2002 and 2003, Alastair was a key member in taking the Brisbane Lions to their historic 3 peat and regarded as one of the best teams of all-time.

Alastair became the 23rd player in AFL history to kick 600 goals, the 43rd player and the 1st Tasmanian to play in 300 AFL games, a successful finish to his career in 2004. He also ranks equal 5th in all-time AFL finals goals.

His skills and extensive football experience have been honoured through the renaming of the former William Leitch Medal, to the Alastair Lynch Medal awarded to the best player of each season in the AFL Tasmania State League. Alastair was also chosen in the Fitzroy Team of the Century and the Tasmanian Team of the Century, as well as been inaugurated into the Tasmanian Football Hall of Fame as an Icon of Tasmania Football.

In 2005, Lynch authored a biography, titled ‘Taking Nothing for granted’, detailing his fight against CFS and his successful football career.

He is now a Director and share holder in a hugely successful Health and Wellbeing Company, operating across Australia, NZ and PNG.

An AFL commentator with FoxSports and its Fox Footy Channel.

Alastair speaks to audiences about overcoming challenges and adversity to achieve your ultimate goal.  Drawing on experience from his own health battles, both physical and mental, the ups and downs of professional sporting life and learnings from the business world.

Excellent. Alastair's presentation was exactly what I wanted and the way he related his story from sporting terms to the business was great.

The amount of feedback I have received about the information he provided as well as the impression he made with our team was simply unprecedented.

Alastair was a wonderful addition to our football line up and held the audience attention brilliantly.