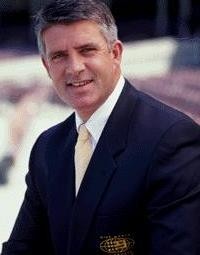 Simon O'Donnell has enjoyed a high media profile since his retirement from competitive sport.

He’s been a regular on the National Nine Network, appearing in key roles on racing programs, Sunday football shows, and most recently, as co-host with Richie Benaud on the cricket telecasts. In fact, he is often touted to replace legendary Benaud as the sole host when he retires.

He also has a great passion for horse racing, owns race horses (managing a racehorse syndicate) and operates a very successful bloodstock agency business. A childhood sporting prodigy, Simon played the first of his 24 AFL matches with St Kilda in 1982. He retired prematurely at the age of 21 to concentrate on his cricket career.

As a cricketer, he made a century for Victoria on his shield debut. Simon was an all rounder, playing six test matches, but it was in the one day international arena in which he really excelled. His 87 one day internationals were characterised by his hard hitting batting in the middle order and his economical medium pace bowling. He was the last sportsman to actually play (and ever likely be to play) both international cricket and AFL football, ample testimony to his sporting abilities.