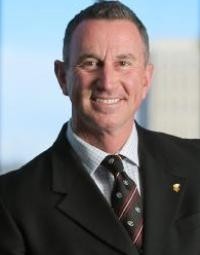 Raised in the Central Queensland town of Rockhampton, Duncan Armstrong rose to national and international fame at the Seoul Olympics in 1988 when he broke the world record to win the Gold Medal in the 200 metres freestyle.

As a born performer Duncan likes nothing better than transforming an audience and motivating them through inspirational sporting stories.   Duncan speaks about leadership, teamwork, fulfilment, goal setting, and branding.  He tailors his keynote presentations specifically to suit topic and event outcomes.

During his stellar career Duncan also won a host of honours out of the water, including Young Australian of the Year and an Order of Australia medal.

After representing Australia at two Olympic Games, Duncan retired from the pool in 1993 to pursue a career in media and corporate coaching. Duncan is currently contracted with Fox Sports and presents all their swimming coverage, as well as hosts Fox Sports Central on Sundays. Athens 2004 was Duncan’s third Olympics as a commentator, where he brought all the action from poolside with Radio 2GB.

Duncan faces each year with his usual energetic youthfulness, and promises to deliver on every facet of his career. Media commitments will keep him well and truly in the limelight, while he continues to develop great corporate and community programs with his long-term business partners Westpac Banking Corporation and Telstra.

Fantastic motivated speaker with real world connections to theory and practice. Again 10/10. Would have loved the session to have been longer. Great inspirational leader and motivator. Very entertaining presentation with a new perspective to leadership and motivation. Absolutely Brilliant, do not ever run this course without this speaker.

Duncan was a fantastic speaker and truly embraced the community spirit and involvement sharing his time with many of us throughout the evening. His speech was outstanding, the best I've seen and it really was a pleasure to have him a part of such a special evening.

Duncan was simply excellent and did exactly what we asked and more, he provided fantastic inspiration to the sales team to get out there and continue to perform at their highest personal level.