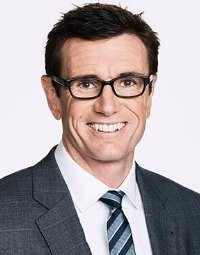 Ben Ikin is a former professional rugby league footballer who played 150 games in the NRL with the Gold Coast Seagulls, North Sydney Bears and Brisbane Broncos. Ben represented QLD 17 times and played two tests for Australia, and still holds the record as the youngest player ever to play State of Origin football.

Following a triumphant playing career, Ben spent five years as a rugby league commentator for the Nine Network and co-host of The Sunday Footy Show. Ben has also worked in various senior commercial roles in the property and construction industry, but now works full time in the media with Fox Sports as host of NRL360.  He is a columnist for The Australian, and a director of the Queensland Rugby League.

Ben’s keynote presentations are a mix of sport and business, intertwined with some enriching life experiences (he’d bought, run and sold a hotel by the age of 28). There’s no clichéd rhetoric, just home spun wisdom, developed over 10 years of top level sport – wisdom that’s as applicable to aspiring young athletes as it is to high level corporates.