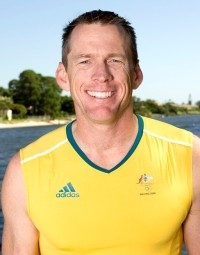 Olympic rower Duncan Free has shown how courage and determination can triumph. Widely regarded as the most complete rower in the large Australian Squad; Duncan had always demonstrated superb athleticism, power, technical precision and tactical smarts. But despite his renowned skills, the Olympic Gold Medal had always eluded him until 2008.

His international rowing career was launched 17 years earlier in 1991, when as a junior rower he won a Silver Medal at the Junior World Rowing Titles in the single scull. In 1994 Duncan made his debut in the Australian senior team in the quad scull and he won his first Olympic medal, a bronze, at the 1996 Atlanta Olympics.

Following this Duncan continued to compete internationally, picking up World Championship Medals in both quad and double sculls. In 2001 he represented Australia in the World Championship in the single scull where he finished in a creditable fourth place. In 2006 Duncan switched disciplines from sculling to sweep and joined forces with former ‘Oarsome Foursome’ member, Drew Ginn, to row in the pairs event. Subsequently the pair were voted ‘International Crew of the Year’ after winning back to back Gold Medals at the 2006 and 2007 World Rowing Championships.

After dipping his oar in for his fourth Olympic Games, Duncan made his childhood dream a reality when he won a Gold Medal in the men’s pair at the 2008 Beijing Olympic Games. During 2009, Duncan took a year off competition before preparing for the 2010 and 2011 World Championships. Unfortunately injury prevented Duncan from competing in his 5th Olympic Games in London in 2012.