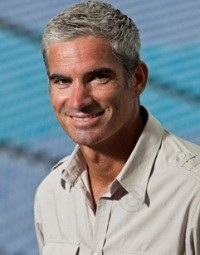 Craig Foster is one of Australia’s most recognised and respected football personalities. He is a prominent analyst, commentator and writer.

He is the lead sports presenter on World News Australia, a forthright football columnist with the Sun Herald and author of “Fozz on Football” – where he expands on the grand vision of Australia one day winning the FIFA World Cup.

Craig now acts as Australia’s sole judge for the prestigious Ballon D’Or for world footballer of the year, awarded jointly by FIFA and France Football magazine, the Asian Football Confederation (AFC) International Player of the Year and as a judge for the internationally renowned magazine, World Soccer, annual awards.

Life member and former Chief Executive of Professional Footballer’s Australia (PFA), the representative body of professional players, Craig’s playing career included 29 international appearances for the Socceroos including as Captain, along with a lengthy club career in Australia and England with Portsmouth FC and as Club Captain of Crystal Palace.

In addition, the PFA award an annual scholarship in media studies in Craig’s name to a current, professional Australian player.

Aside from his media commitments, Craig holds a Postgraduate Degree in Football Management from the Johan Cruyff Institute for Sport Studies in Barcelona and an Advanced B Professional Coaching License from the Asian Football Confederation, is an Ambassador for the Australia Day Council, Barnardo’s, The Homeless World Cup, The Big Issue Street Soccer Program and Football United, a charity for refugee and disadvantaged kids, which is Australia’s only member of the FIFA Football For Hope family.

Craig is also a Director of the Johnny Warren Football Foundation and COALAR, The Council on Australia Latin America Relations, under the auspices of the Australian Government Department of Foreign Affairs and Trade.

In 2011, Craig initiated the ‘Harmony Game’ in conjunction with SBS and the Australian Government Department of Immigration as part of Australia’s national ‘Harmony Day’, which aims to use football to teach the importance of diversity, acceptance and multiculturalism in Australian public schools and which now sees thousands of school children sharing a ‘kickabout for understanding’ on March 21 each year.