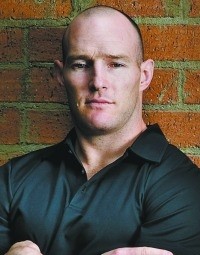 Born in Sydney on 20 May 1977, Stirling Austin Mortlock began playing rugby with Lindfield Juniors at four years of age. Stirling represented Gordon Juniors in U10, U11, U12 and U16's. Following school years at the Kings School, Stirling returned to play in 1995 for Gordon in the Colts ranks and the now very famous Rod Macqueen plucked Stirling out of club rugby at the very tender age of 20 to tour Argentina with the Wallabies in 1997.

In 1998, Stirling joined the ACT Brumbies and after a couple of solid seasons of Super 12 finally made his Test debut against Argentina in 2000. This was a landmark year for Stirling who became the fastest Australian to reach 50 and 100 Test points, as well as scoring the most points and highest number of penalties by any Australian in his first five Tests

Stirling created history by becoming the first Australian to score 20 points or more in four consecutive Tests. With the Wallaby team, Stirling was instrumental in the very famous Bledisloe and Tri-Nation Series' Victories of 2000 - he will long be remembered for his sideline penalty goal against South Africa in Durban to win Australia's first Tri Nations crown. It became apparent from very early in Stirling's Wallaby career that he was a big match player - no one will forget his man-of-the-match performance and his 80-metre intercept try at Telstra Stadium to help knock the All Blacks out of the 2003 Rugby World Cup semi final.

Stirling succeeded George Gregan as ACT Brumbies Captain in 2004 and with instant success, lead the team to claim the prestigious Super 12 title. This was the second Super 12 title that Stirling has been part of (the other was in 2001). Regarded by many as the hardest running centre in world rugby, constantly using his immense strength and sharp footwork to breach defensive lines of his opponents, Stirling has also proven to be a born leader and a proven match winner. In 2006, Stirling was passed the honour of becoming the 73rd player to Captain the Wallabies. Stirling lead the team from the front and they claimed the Cook Cup from England.

In 2007, Stirling continued to lead the Australians through Tests victories against Wales and Fiji, before guiding the team to wins over New Zealand and South Africa. Stirling celebrated his 50th Test against the Springboks in Johannesburg, played an instrumental role in the Wallabies 20-15 upset over the All Blacks at the MCG, setting up Scott Staniforth for the match-winning try that was ultimately judged Try of the Year at the John Eales Medal dinner.

Stirling received his greatest honour when he was asked to Captain the Wallabies at the 2007 Rugby World Cup in France. Stirling's uncanny ability to score tries and kick goals has positioned him third on the all-time list of Australian Test point scorers (with 489 points) and he holds the mantle as the highest Super Rugby all-time point-scorer (with 1,031 points). In February 2008, Stirling announced that he will continue playing with the Wallabies until at least the end of 2010. Australian Rugby Union CEO John O'Neil endorsed Stirling as a "real captain courageous and an inspirational leader".

These comments were backed up by ACT Brumbies CEO Andrew Fagan, describing Stirling "as the best outside centre in the world" and "..he's shown on countless occasions that he's a natural leader, a guaranteed Match winner for both the Brumbies and the Wallabies. A player that spectators will specifically come to see". On 31 March 2010, the Melbourne Rebels announced they has signed Stirling to a three-year deal. Stirling was declared the Rebels inaugural Captain under Coach Rod Macqueen on 2 February 2011 and scored the first ever try for the franchise. This try led to the Rebels first win against Stirling's old team the Brumbies.

In 2011, Stirling was awarded the Rod Macqueen Pursuit of Excellence Award and was also inducted into the Gordon Rugby Club Hall of Fame in recognition of outstanding contributions, achievement and club spirit. In September 2011, the Sydney Morning Hearld ran a public poll and honoured Stirling in the "Greatest Wallabies Since 1987" Team in his favoured #13 position alongside the likes of John Eales, Nick Farr-Jones, Tim Horan, David Campese and Phil Kearns.

On 26 January 2012, Stirling was awarded Member of the Order of Australia (AM) for service to rugby, particularly as Captain of the Wallabies.

In May 2013 Stirling joined TEN's expert rugby commentary team for the 2013 British and Irish Lions Rugby Tour and The Castrol Edge Rugby Championship. Returning to the test arena as TEN's man on the sidelines, Mortlock – the celebrated powerhouse centre of Australian rugby – is set to deliver a unique insight and knowledge of the game to fans. He joins the voice of rugby, TEN’s Chief Rugby Commentator Gordon Bray, and Wallabies great Matt Burke for this huge year of rugby union on TEN."

In September 2013 Foundation Captain Stirling Mortlock accepted the role of Director on the Melbourne Rebels Board. Rebels Chairman Jonathan Ling is delighted Mortlock will be joining him on the Board. "It gives me great pleasure to announce that Stirling has accepted our offer to assume this crucial role," Ling said. Mortlock commented that "It is an exciting time for the Melbourne Rebels and its members, with the Melbourne Rebels now being truly owned by the Victorian Rugby Union community, it provides a unique opportunity for all stakeholders to benefit from mutual goals and ambition. With both the on and off field teams under new leadership, and a young playing roster, we are on the cusp of building a Rugby program that is the envy of Club, provincial, and national teams here in Melbourne. We can now collectively work as one, in union."