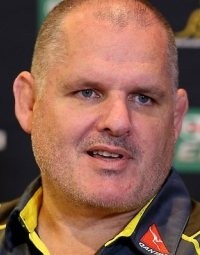 Ewen McKenzie has enjoyed success in coaching. His first season as Head Coach of the Queensland Reds in 2010, he guided the team to fifth place and their best result since 2002. In 2011 he led the Reds to their first Super Rugby Championship title since 1995.

A World Cup winning prop in 1991, Ewen took up coaching after retiring as a player in 1997. He became a Wallaby selector and worked as an assistant coach and coaching coordinator to both Rod Macqueen and Eddie Jones at the Wallaby level between 2000 and 2003.

He enjoyed coaching success at this level, twice in the Tri-Nations, against the British Lions and the Bledisloe Cup. He also was the Assistant Coach in the 2003 Rugby World Cup where Australia lost the final in extra time. He succeeded Bob Dwyer as Head Coach of the Waratahs in November, 2003. He led the team to the 2005 Super 12 final in just his second year at the helm, and to the semi-finals in 2006 and final in 2008. He is currently the Waratahs longest serving coach in history. He was also involved as a coaching coordinator with the ACT Brumbies for three seasons including a Super 12 semi final and was also Australia A coach in 2005. Before joining the Reds, Ewen was the Head Coach of French club Stade Francais, also taking them to a semi-final in the Top 14 in 2009.

As a player, Ewen played 51 Tests across seven years for the Wallabies. He made his first Wallaby tour in 1988 to the UK and played his first test match in 1990 against France. He represented a World XV in 1992 and the Barbarians for Australia, New Zealand and the British throughout his career. At the state level he was capped 37 times for NSW between 1987 and 1995 and another 36 times for the Brumbies (1996-97), also playing in the 1997 Super 12 final.

A product of Scotch College, Melbourne, Ewen holds a degree in town planning and was the second Victorian born and bred player to represent Australia after the great Sir Edward 'Weary' Dunlop.