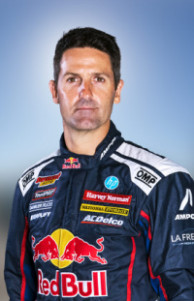 With history-making back-to-back V8 Supercars championships at Ford and now Holden, it’s easy to understand why Jamie Whincup has a target painted squarely on his rear spoiler.

At just 37 years of age and with seven championships and four Bathurst 1000 titles to his name, this Queenslander has been identified by experts as the man likely to break every standing record in V8 Supercars history.

It all started in 1991 when his father purchased a seven-year-old Whincup his first ever go-kart. By age 14 he had claimed countless rookie and junior titles and celebrated his 15th birthday by winning the Senior Formula A karting title. And in the very same year he finished high school Whincup added to his mantle piece the Australian Formula Ford Championship trophy.

With a fierce attitude and relentless in his desire to win, it was only a matter of time before Whincup made the leap to V8 Supercars.  Spotted by Garry Rogers, he made his V8 Supercar debut at the Queensland 500 in 2002 before graduating to a full-time position with the team a year later.

Throughout the following years Whincup has had great successes and challenges in racing.  He spent many years driving with Red Bull Racing and with driving partner Craig Lowndes.

While 2017 saw the lowest number of race wins since 2006, Jamie's consistency kept him at the top of the tables which ultimately led him taking the championship by just 21 points.  This was a championship that literally came down to the last lap of the last race.

The 2021 season was Whincup's last as a full-time driver, with the 124-time race winner retiring from full-time competition at season's end.

Whincup maintains his steely focus that has cemented himself as a modern-day great of Australian motorsport.