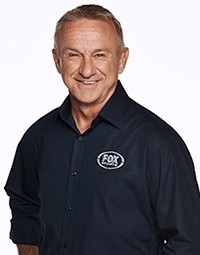 Russell Ingall’s tough, uncompromising attitude has earned him the nickname ‘The Enforcer’. A winner on-track and with fans, Russell is one of the most recognisable faces in Australian motorsport as well as one of the most internationally travelled and successful drivers.

Russell began racing at the age of 12, racing go-karts in Australia. After winning an Australian Junior and four Senior karting championships he moved to race karts in Europe before making the transition to Formula Ford.

Russell then made the move to other categories where he successfully competed in Championships from Formula Renault to Formula 3 in Great Britain, Europe, Germany and Japan as well as the Macau Grand Prix, Indian Madras F3GP and Monaco GP F3 support race.

After finishing third in the 1995 British Formula Renault title, Russell returned to Australia to partner Larry Perkins to victory in the Bathurst 1000 – coming from last to first to win. The victory earned him a full time drive with Perkins’ team in the Championship, a partnership that would last six years.

In 2002 Russell moved from Perkins Engineering to join Stone Brothers Racing and Ford. After finishing runner up again in the V8 Supercars Championship in 2004 to Ambrose, he finally achieved his goal in 2005 and won the coveted trophy.

In 2008 he moved back to Holden and joined Paul Morris Motorsport and also began a five year partnership with sponsor Supercheap Auto. He spent his final two years with the brand at Walkinshaw Racing. 2013 saw Russell achieve the highest number of race starts of any driver in the history of V8 Supercars.

In 2014, a revitalised Russell paired with a new sponsor in Phil Munday’s Repair Management, at a new look Lucas Dumbrell Motorsport for his 19th consecutive V8 Supercar Championship. Russell finished a respectable 18th in the Championship - 8 places higher than the team had ever achieved previously.

Russell was very easy to deal with, very accommodating and cooperative in making arrangements for his presentation. He provided ample time at the venue for guests to make conversation before and after his presentation, and was well received by all. Most delegates detailed Russell's presentation as being the highlight of the conference.