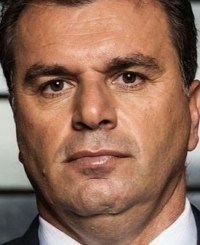 Less than 18 months into his reign as Australia’s Socceroos head coach, Ange Postecoglou struck gold when his regenerated team hoisted the 2015 Asian Cup in front of 75,000 delirious football fans at ANZ Stadium in Sydney.  It was Australian soccer’s finest moment, with victory coming in extra time to shut out South Korea 2-1.

For Ange Postecoglou, who was born in Athens and migrated to Australia with his parents Jim and Voula aged five, the history-making victory provided a clear signal that the new generation Socceroos had begun an emphatic march forward to win international recognition.

Ange played 193 senior games for South Melbourne between 1984 and 1993 and was appointed captain aged 22. With South Melbourne, he figured in two National Soccer League championship victories – in 1984 and 1990-1991. Having played for Australia at youth level in 1985, he graduated to the Socceroos in 1986, winning four caps in the next three seasons.

During his time at the helm of Brisbane Roar, he established the longest undefeated sporting streak of 36 matches, passing the Sydney Roosters’ 19 game undefeated run in their 1974-1975 rugby league premiership triumphs.

Ange was appointed Australia’s national coach in October 2013 on a five year deal, taking on the challenge of re-energising the Socceroos squad for the 2014 FIFA World Cup. With the Socceroos drawn in Group B alongside reigning champions Spain and 2010 runners-up Netherlands and Chile, the task was daunting. Even though Australia lost all three matches, the Socceroos were widely praised for their efforts in an exceptionally tough group – providing belief that better days certainly lay ahead.

Ange is a highly regarded public speaker and commentator, with a significant background in both print & television media. More recently, he's been writing a weekly column in the 'Melbourne Age' and working on the corporate speaking circuit with overwhelming success.

His focus and challenge is now squarely on Australia qualifying for the 2018 FIFA World Cup.