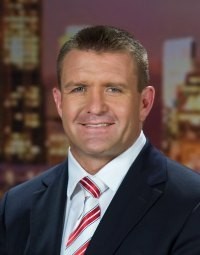 A former Rugby League prop whose autobiography is titled “Warhorse” (nickname), Shane Webcke has the country roots and love of the land that often produce the hardest sportsmen. He has always been a tough competitor as a player and assistant coach at his beloved club, the Brisbane Broncos.

Shane was, without question, the world's best front rower. He was a player with heart and commitment to whatever team he took the field with and was the cornerstone that the Broncos built their entire team ethos around.

As a keynote speaker Shane covers areas of teams, leadership, values and general motivational stories of his life and career on the football field.

Someone who thrived on a challenge, Shane was one player coach Wayne Bennett and the team knew they could rely on when the going got tough, with Wayne saying, “Shane is in the category of the most exceptional people I’ve ever met.” Shane finished his Rugby League career with a fairytale ending after the Brisbane Broncos won the 2006 Grand Final.

On that night he retired from professional football being name as one of the very best in the business. He played 254 matches for the Brisbane Broncos (including their 2006 Grand Final win), made 21 State of Origin appearances for Queensland, and played 20 Test matches for Australia. He retired after four Grand Finals and four Premiership wins. Shane was the consummate team man. He realised better than anyone that there is no easy answer, no easy way to achieve success.

He worked hard for everything he achieved. He is a family man and a man of values. His rugby league record at club, state and test level has been exemplary. He was named as one of the 100 Greatest Players of the Century.

Shane is the publican of a historic Queensland watering hole, a television sports presenter and the ambassador for Suncorp Sunwise, Junior Rugby League and the APN Adopt-A-Family campaign.