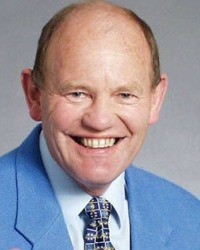 Billy Graham is New Zealand's best-loved motivator and fitness advisor. He is bold, bouncy and brimming over with energy and enthusiasm. He has spent a lifetime involved in sport and physical fitness. A former New Zealand and Australasian light welterweight boxing champion he has achieved success through goal setting and determination.   In times of increasing economic pressure, Billy speaks to businesses in need of a boost, inspiring them to make things happen when faced with a crisis. Billy is a realist who gets results!

Billy delights in telling stories of his own life to show that anyone can make it. Having left school unable to read or write Billy took up butchering and later teaching physical education. He eventually started his own business and some of his talents were recognised when he appeared on Television New Zealand’s programme “Made in New Zealand”, which featured successful New Zealand companies.

Billy has designed a unique fitness product complete with endorsements from the US Airforce Academy and Floyd Patterson – ex world heavy weight champion. No small achievement for a dyslexic who left school at 14!

In January 2006 Billy established the Naenae Boys’ Academy, a charitable trust which is the fulfilment of a life-long dream to have his own boys club in his troubled home town of Naenae. Billy trains up to 100 young men three days a week, a large number of whom are at serious risk, out of his desire to make a difference and provide for others what was provided for him, imparting the message that they can be anything they want to be if they don’t break the rules.

This resulted in Billy again being featured on television, this time on 60 Minutes. In 1998 Billy had his motivational memoir, Your Ship Came In The Day The Doctor Smacked Your Bum. It reached No. 1 best seller on New Zealand’s business book list.

Thank you for your outstanding presentation. Your no compromise, enthusiastic message motivated many to look at themselves, set new goals, and view the challenges ahead of them positively... Your involvement was the spark that ignited the conference to become our best ever!