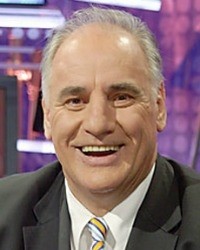 'You know it makes sense, I’m Sam Kekovich'. This is not only the title of his top selling book, but has also become the catchcry of the flamboyant AFL legend, media personality and Lambassador, Slamming Sam Kekovich.

A star player with North Melbourne and Collingwood, Keka was a fine contributor to North Melbourne’s first Premiership victory back in 1975. Nothing moved on the North Melbourne half-back flank without his written permission. His playing career for more than a decade included running battles with coaches such as Ron Barrassi and he played over 150 games, won a Club Best and Fairest, represented Victoria, and remained a colourful and a favourite topic for the sporting press. Now Sam enjoys playing the entertainer and commentator with his conference keynotes and MC work.

He is a self made entrepreneur and media identity. His media credits include regular appearances on Channel 9’s Footy Show, co-host of Melbourne’s 3AK radio breakfast team, presenter of ABC’s “The Fat”, and appearances across Fox Football programs and regular radio guest spots.

He was the President of the Hammerheads, the Television Football Team created by Network 7’s show “The Club” and was the Chief Executive Officer of “K Rock” Radio in Geelong. In 2005 he became the face of the hugely successful meat and livestock advertising campaign for lamb where, in true Keka style, he has told the public to buy lamb or they’ll get a serve from him.

Sam is an engaging host and entertaining story teller. He is extremely humorous bringing together his best moments and the characters he has encountered over the last 30 plus years not just on the footy field but in life.

Sam was outstanding, a great choice. His humour is riveting and whilst it lasts he will be very successful.

Sam was fantastic, one of the best event MCs we've had.

Sam was definitely the highlight of our conference.