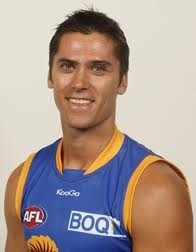 Simon Black stamped himself as one of the truly elite midfielders of the modern era when he won the game’s most coveted individual honour in 2002, the Brownlow Medal, and the Norm Smith Medal in 2003.

He was also part of the winning Brisbane Lions Premiership team in 2001 - 2003. Simon also had the distinction of being one of the most decorated players in the game by the ripe old age of 24.

2004 he claimed his third All-Australian jumper. While 2001 will always be remembered for the first stunning premiership win, Black’s confirmation of his high standing in the game was one of the highlights. Premiership Player, co-Club Champion, All-Australian – he would have thought it wouldn’t get much better than that, although it did!

Born in Mt Isa, Black was something of nomad in his early years before his family settled in Perth. A product of Corpus Christie College, he played his junior football at suburban Bullcreek, south of Perth. Black shares his Mt.Isa birthplace with two other prominent sportsmen – Greg Norman and Pat Rafter.

Simon has however completed various business studies and is currently a lecturer for the Youth Suicide Prevention Cause – Here for Life. He has recently purchased a Bank of Queensland franchises at Kallangur and Southport Queensland.