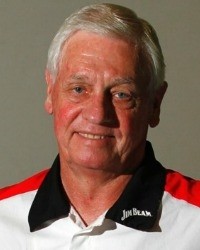 Dick Johnson is one of Australia's most successful Touring Car Drivers of the past decade. He is a three time winner of Bathurst and five time victor of the Australian Touring Car Championship. He started motor racing over 30 years ago winning his second start in a Holden FJ.

Dick has now progressed to a Falcon V8 and in 1994 won both the Bathurst Toohey's 1000 and the Sandown 500 endurance event, the first time in a decade that anyone had won the Sandown-Bathurst double.

Dick is a lively and entertaining speaker, his leadership and expereience are second to none, and is able to tailor his presentation to the needs of the corporate sector.

Dick became a national celebrity in 1980 when, while leading the Bathurst classic, he hit a rock rolled onto the track by a spectator and crashed out of the race.

After an enormous flood of sympathy and donations from the Australian public Dick was back at Bathurst and victorious the following year.