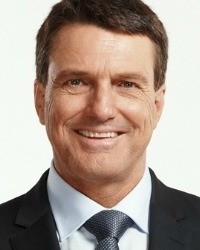 Not content with establishing a celebrated reputation as an outstanding AFL player and premiership-winning coach, Paul Roos has also made a definitive mark off the field as well as a renowned corporate speaker, television host, columnist and author.

In mid 2016 Paul finished his tenure as head coach of the Melbourne Demons. Paul has received an enormous amount of praise for his key role in taking the Demons to new heights and rebuilding their coaching and leadership groups.

And having taken the Sydney Swans to premiership glory in 2005, he is one of the most respected figures in Australian sport.

When the 2005 Australian Sports Coach of the Year and 2008 Australian Father of the Year placed his hands on the AFL premiership trophy in 2005, it signalled the end of a 72-year drought for the Sydney Swans. With more than 92,000 fans watching on at the Melbourne Cricket Ground, and hundreds of thousands more glued to television screens around the world, this was Roos’ moment of glory. The former 356-match AFL superstar and Australian Hall of Fame member had just witnessed a nail-biting final quarter in the grand final that saw the Swans come from behind to snatch an historic 58-54 victory over the West Coast Eagles

Paul and his wife, Tami, are also available as a couple under the name of The Roos Synergy to speak on the topics of teamwork, leadership and performance.

Paul Roos delivered one of the best presentations I have ever heard. His presentation exactly reflected my brief and gave the audience an insight to how he runs the Swans as a business and made everyone in the room relate to what he was talking about in their own individual way. The feedback was excellent and the attendees are still talking about it.

The presentation Paul Roos gave to employees was very influential in shaping our day of discussions. Paul did a great job. The consensus was that of all the sports speakers the group has seen Paul was far and away the most impressive. He has very clearly through through what he's doing at the Swans and can describe it in a meaningful way. The team is looking at other ways to involve him and I expect we'll be back asking for another session.