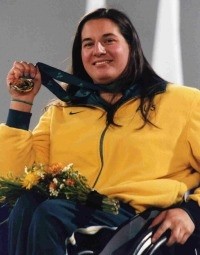 Louise Sauvage is recognised and acknowledged for her unique athleticism and outstanding success as a wheelchair track and road athlete.

She captured the attention of the world media and through her sporting achievements is an international house hold name.

At age 18 Louise declared that she was to become a professional athlete and would earn a living from her sport -  she defied those doubting her and retired as one of Australia’s most successful athletes.

Along the way Louise has changed the perception of elite athletes with a disability and the sports they compete in. She helped create awareness, education and acceptance of disability in general in the eyes and minds of the media and the public.

Louise dominated the sport of wheelchair track and road racing during her career winning a total of 9 Gold and 4 Silver Paralympic medals from 4 Paralympic Games.

She represented Australia at 3 Olympic Games winning 2 Gold and 1 Bronze in the 800m women’s wheelchair demonstration race, the highlight being Gold in front of 110,000 spectators in her home town at the Sydney 2000 Olympic Games.

Louise is a Commonwealth Games Silver medalist and five times Gold medalist at the IAAF World Athletic Championships. She recorded World records in every distance on the track from 100m to 5000m and has 1st place victories in some of the world’s most prestigious road races including 4 Boston Marathon titles.

She has completed a Post Graduate in Applied Science (Coaching) and is now employed by the NSW Institute of Sport with the National Wheelchair Track and Road Program as an Assistant National Coach working with Australia’s future champions.

Her Awards include an OAM, Sport  Australia Hall of Fame NSW Hall of Champions - Legend Status, Australian Female Athlete of the Year, World Sportsperson of the Year with a disability and  Australian Paralympian of the Year (on four occasions).

Louise was fantastic. Her speech was inspirational in the extreme and she was such a wonderfully good sport. She brought one of her Gold Medals along and offered to pose for photos and ended up staying right through morning tea posing for photos with delegates...they all thought she was fantastic!

Congress was a great success and your contribution ensured this. We are very pleased with the response with 1,400 delegates attending the conference over the two days which is a record attendance for the South Australian Division.n

Louise Sauvage is an amazing Role Model in any walk of life. A great athlete with determination to achieve.