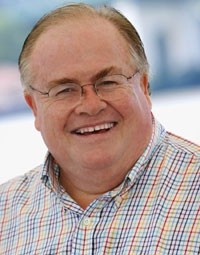 As a barrel-chested prop forward 'Buddha' Handy created mayhem on the rugby fields around the world with his uncompromising and rugged play. He played 54 games for Queensland and went on to earn his Wallaby colours. He joined a rather select band of Wallabies to have lifted the Bledisloe Cup on two occasions after victories against arch rivals the New Zealand All Blacks.

In retirement Chris Handy’s image has changed overnight! The former mild mannered, bespectacled accountant, these days is one of Queensland’s most popular publicans. Over the past sixteen years, he has developed into a multi media personality, MC and guest speaker of high repute and has established himself on the celebrity-debating scene.

In 1983 he became expert commentator on ABC television and was on hand at Twickenham in 1991 to call the drama charged final when Australia became World Champions. Today he is the resident rugby panellist on Seven’s weekly sports show “Sportscene” in Brisbane and “Sports World”, which is televised nationally.

As his nickname suggests, the affable roly poly Buddha has built up a multitude of sporting anecdotes which has made him a very popular after dinner speaker and rugby author of “Well I’ll Be Rugged”. His stories are endless, his wit sharp, his style unique, making him a much sought after guest speaker both internationally and at home.