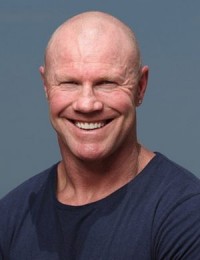 Former AFL player and Sydney Swans Captain, Barry Hall is considered to be one of the best Forwards of the modern era.  He was named ‘All-Australian’ 4 times, he is the only player to ever win a game from a kick after the siren – twice, lead his club’s goal kicking on eleven occasions and captained the Swans to their 2005 AFL Grand Final victory.  In July 2011 Barry created history by becoming the first player to kick 100 goals for three different AFL teams.

A strong mark and accurate kick, Barry developed into an example of what was seen as a ‘dying breed’ in his era, a power full-forward who played exclusively in that role. He began his AFL career in 1996 and played as a centre-half-forward for much of his first three seasons. But a three-goal burst in just five minutes during the 1997 Grand Final gave coaches and fans alike a hint of his potential as a permanent full-forward. In 1999 this transition took place and from then until his retirement at the end of the 2011 season, Hall kicked at least 40 goals in all but two of those seasons. A strong mark and accurate kick, there’s no doubting his football credibility which is something he shares through his roles on Fox Footy from panel programs to Boundary Riding. 2017 will also see him take on the role as Forward coach of the Gold Coast Suns.

Barry has opened up on his battle with depression after finishing his football career, and being sacked from radio in an effort to encourage others who are struggling as well.

But there is more to Barry, he’s a qualified mechanic with a passion for cars and a family business in the trade.  As a personality, he is a popular name across the media, a sough after guest on radio programs and regularly approached to be on TV programs such as I’m A Celebrity Get Me Out of Here on which he became a viewer favourite.