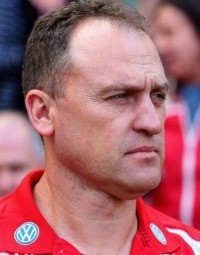 Commencing his coaching career with the Swans in 2002 as a rucks/forward coach, John moved his way up through the coaching ranks continuing as an assistant until 2007 before being appointed as coaching coordinator. John held this role until 2011 when he was appointed as Senior Coach.

John has reached the AFL Finals in each year he has been Senior Coach making a Semi Final in 2011, AFL Premiership in 2012, a Preliminary Finals berth in 2013, 2014 AFL Grand Final, 2015 Semi Final, before again reaching the 2016 AFL Grand Final. This success re?ects the culture John has helped build over a number of years which demands a high level of expectation and intensity from his playing group. John’s current win/ loss percentage is 68.5% which is the highest amongst all current and past AFL coaches.

Before becoming a coach, John was a very successful player for North Melbourne. He burst on the VFL/AFL scene as a schoolboy winning a Coleman Medal, Syd Barker Medal, and All Australian Award all in the one year. He was also the leading goal kicker for North Melbourne on a number of occasions. Whilst John enjoyed great success throughout his playing career culminating in an AFL Premiership in his ?nal game, he also endured many tough times including two knee reconstructions. Immediately following his retirement from playing, John was brie?y a player manager for global giant IMG for two years before heading back into the AFL Club environment.

John’s ?rst hand experience of being a senior coach and playing in an elite environment, plus having worked as an AFL agent has him well placed to speak about team building, culture, adapting to change, management, relationship building, and strategy, in both a keynote presentation and Q&A forum.