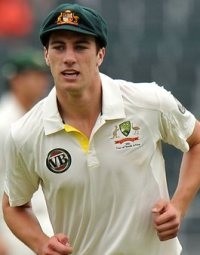 Pat Cummins exploded onto the international cricket scene in 2011. He made his international debut in both limited-overs formats in South Africa in October, claiming 3-28 on ODI debut including the prized wickets of Jacques Kallis and JP Duminy.

He remained in South Africa as a member of the Test squad, and forced his way into the XI for the second Test in Johannesburg. Cummins showed maturity beyond his years working over Jacques Kallis on his way to 6-79 in the second innings and seven wickets for the game before hitting the winning runs and sealing man of the match honours in his first Test.

He carried a heel injury through that Test, which resulted in a lengthy period off the field and he could not be considered for the summer series at home. He made his return to cricket in the Australia U19s squad in February 2012 and spent the winter months in training at the Centre of Excellence in Brisbane before joining the Australian team to play in the Twenty20 Champions League in South Africa.

Cummins was prolific in his first domestic season in 2010/11,  helping NSW qualify for the Champions League with a competition-high 11 wickets at 14.09. Combining extreme pace with admirable control for a young man in his final year of high school, he finished the summer with three first class games for the Blues including the Sheffield Shield final, in which he kept his pace up through a marathon 65 overs, 48 of those in the first innings when he returned the figures of 3 for 118.

He missed an Australia A series in the winter because of a back injury but became the youngest player to earn a Cricket Australia contract since the current system was introduced in 1998.