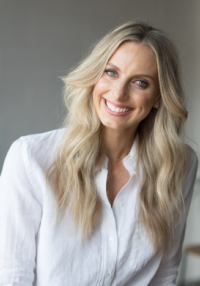 The wheat grows tall and golden on farms around Allora, two and half hours south-west of Brisbane where Laura Geitz grew from a wide-eyed playful country girl to an international netball superstar. And though Laura left Allora, she remained the same humble, down-to-earth country girl as she lit up netball courts around the world Laura’s achievements in netball are legendary, winning two world championships, a gold medal at the 2014 Commonwealth Games and three domestic championships. As captain of the Australian Diamonds and the Queensland Firebirds, Laura redefined what it meant to be a netball champion and became a role model to young girls wherever in the world a netball was shot through a hoop.

While Laura was queen of the netball court, her inspirational leadership and big heart made it inevitable that she would score some serious goals away from the game. Laura has been the driving force behind a number of initiatives to inspire girls to start and stick with the game. One of these programs was Fuel2Fly which gave young girls advice on goal setting, nutrition and building confidence, as well as netball coaching tips.

Laura is also part of the Channel 9 commentary team for the Super Netball broadcast and her presence is growing nationally through corporate partnerships that have lead to appearances in TV commercials and other high profile media exposure. If anyone has the perfect profile to create their own activewear brand it’s Laura Geitz, with Tribal Netball Geitzy launching in early 2020. But her most cherished role is being a mother of three and Laura’s a champion at that too.

While Laura’s heart will always belong to the bush, she is passionate about roles where she can make a difference anywhere throughout Australia.

Laura brings the same passion and commitment to any project she undertakes as she famously brought to the netball court.