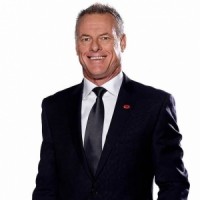 An experienced radio and television commentator with 3AW and Fox Footy, Russell combines knowledge, humour and enthusiasm in his calls. Russell came to prominence with the ABC in 1997, forging a reputation as one of the country’s most highly regarded and respected commentators.

When Channel 9 gained the AFL rights at the start of 2002, they did not hesitate to add Russell to their commentary team. He moved to Fox Sports at the beginning of the 2007 season and continues to entertain with his informative description of the action. Russell’s presence on Fox has included roles as host of weekly AFL round-up program ‘The Winners’ and ‘AFL Winners Presents: The Greatest’, which looked back at some of the most memorable moments in AFL history.

His repertoire has also extended to include commentating Olympic and Commonwealth Games Hockey and Equestrian, the Australian Open Tennis and the NBL for Fox Sports. Russell and Gerard Healy head up the popular Sports Today program on 3AW, heard by a huge audience across Victoria each weeknight between 6-8pm. He has also written regular columns for The Geelong Advertiser and The Sunday Age, showcasing his rich knowledge base.

Originally from Port Adelaide, Russell was an exciting and powerful forward during his brief four-year AFL career with Geelong. Featuring in one of the AFL’s all-time great forward lines alongside Barry Stoneham, Billy Brownless and the brilliant Gary Ablett, Russell kicked 51 goals in 60 games with Geelong, playing in two grand finals. Russell also played 71 games with Port Adelaide in the SANFL, representing South Australia on four occasions, once as captain. With one of the most recognisable voices in sports casting, Russell is just as adept in his MC and keynote speaking roles as he is calling the action.