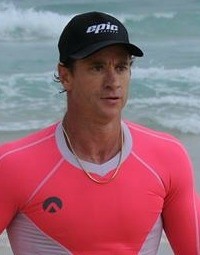 A 1996 Olympian, Jim Walker is an inspirational, passionate and knowledgeable athlete.

Since leaving the athletic arena, where he was World Cup Champion and Australian Surf Champion, Jim has moved into all areas of television, radio and is also a respected public speaker.

He has addressed and inspired more than 200 different companies, ranging from leading business to local community and business groups, government departments and charities and has used his talents in various arenas and through many media outlets.

He uses his journey of becoming a champion athlete and now a champion coach to now teach people, teams and large organisations the skills that are needed to help reach their goals.

In the last 8 years Jim has been coaching at the NSW Institute of Sport, Head coach Australian U/23 Kayak Team as men’s elite sprint coach. In this time he has coached paddlers to many national titles and numerous state titles. To date his greatest achievement as a coach is the inclusions of one of his paddlers on the 2008 Olympic Team.

In the world of television, Jim has presented on such shows as Sydney Weekender (Channel 7), as host and commentator of the World White Water Championships (SBS), The Nutri-Grain Iron Man Series and the Athens Olympics.

His experience in radio has varied from 4BC Olympic presenter, fitness and sports expert on 2MMM for their program “The wrong side of the bed” with Scott Cam and several roving reports with ABC.

Everyone was talking about your presentation afterwards about how inspiring it was and how good it was to hear a story such as yours that everyone can relate to. Brilliant work.

Jimmy was entertaining, motivating and his personality shone through. He was an inspiration to all attendees.

Just wanted to drop you a note to let you know how well received you talk to our client, Coca Cola Amatil - Staying Strong When All Around You Are Giving In. The right message at the right time! We had a very high percentage of the group give us very positive feedback about your talk and I just wanted to pass on my appreciation for such a high quality presentation.