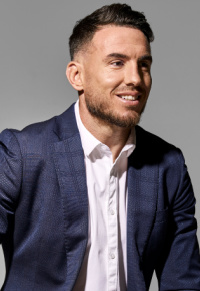 Darius Boyd is a former Australian professional rugby league footballer who played at the highest level for 15 years.  He played fullback, wing, centre and five-eighth for the Brisbane Broncos, and has played for Australia at international level, and State of Origin for Queensland.   Darius captained the Brisbane Broncos from 2017 to 2019.

In 2010 he won the Clive Churchill Medal for his performance in the grand final against the Roosters.  Retiring at the end of 2020 with the Broncos, his legacy as one of the top performers of his generation is well solidified.

Midway through his career after a number of years of mental struggle, he made the brave decision to check into a Mental health facility to help improve his life.

Darius has since been working on himself and promoting proactive mental well-being within the corporate and community spaces. He is currently studying a diploma in counselling and a Cert IV in Elite Athlete well-being.

In 2022 Darius participated in and was a winner in SAS Australia.

Darius made a great contribution during an alignment session in preparation for a major Turnaround and Inspection event at Lytton Refinery, providing great insight into his mental health journey, what it takes to talk about mental health issues and how to take the initial steps towards recovery. The entire team was engaged throughout the session and thoroughly enjoyed the chance to hear Darius’ experience firsthand. We are looking forward to having Darius again to share his insight during future events.