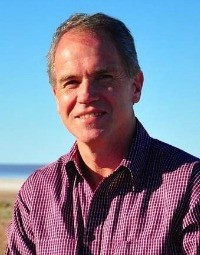 Leigh Radford joined the ABC as a trainee Rural Reporter in Melbourne in February 1988 and has worked at all levels of regional, state and national reporting and also as a long serving Country Hour Presenter. Leigh was the Head of ABC Rural from start of 2005, until July 2017 and was responsible for all Rural television and radio programs and for ABC Rural online.

Leigh has three decades of extensive travel around Australia in these various roles and has broadcast programs from literally right across the country and into the outback.

He is a multi-award winning broadcaster, with a number of Dalgety Awards for Excellence in Rural Journalism, (including the national award winner in 1992); several Landcare awards, and he was the inaugural winner of the Telstra Rural Journalist of the year award in South Australia.

Leigh was recognised as an Honorary Fellow of the Australian Rural Leadership Foundation in 2016 ‘in recognition of exceptional service and commitment to rural and regional Australia’.

He was honoured by Rural Media South Australia in 2017 as a “Rural Media Icon” for his ‘long term contribution to rural media in Australia’.

He comes from a background of environmental sciences and has an Honours degree in Biogeography. He is President of the Royal Geographic Society of SA and represents Australian Rural Journalists on the Executive of the International Federation of Agricultural Journalists.

Leigh is passionate about the people and issues of Rural Australia and has a great love of the environment. He lives in the Adelaide hills with his wife Tracey and two children.