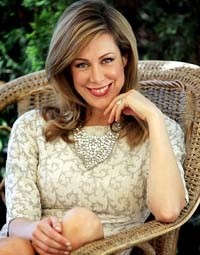 Simone Bennett-Smith, is a skilled actress, presenter and Master of Ceremonies with over 17 years international industry experience. She boasts copious credits to her name including advertising campaigns television and film roles, most recently as the face of Suncorp Bank, Bright Banking campaign and host of channel 7s Queensland’s Best Living series.

Simone has studied acting and stage, scoring local television roles, advertising campaigns and stage work (including a production of Too Hot To Handle (1994) as well as My Fair Lady and Aida (1992) with the Victorian State Opera) while she studied. Her first big local break came when she auditioned for the Kevin Jacobson production of A Chorus Line in 1993, directed by an original cast member, Bayork Lee. Simone won the coveted lead role of Judy Turner and commenced a 14-month national tour with the show throughout 1994/95.

Simone trained at the esteemed Actors Centre in London and also took classes at Pineapple Dance Studios (Covent Gardens). She gradually built a name for herself and people in the know recognised her potential and paid work grew from there.

Simone spent around 6 years in the UK, utilising all her dancing, modelling, hosting and acting skills to win roles on and off the stage, presenting corporate videos and working for many European trade shows as a model and presenter for prestigious names like Dolce & Gabbana. Eventually, disillusioned with the industry abroad and homesick for her native country and decided it was time to come home.

From her new home-base on the Gold Coast, Simone enrolled in further local performance schools in order to pursue acting and presenting. Simone took some classes with renowned casting director Tom McSweeney to pass the time, and consequently rekindled her underlying love for the stage.

Simone went on to successfully win many more roles in advertising campaigns. She also appeared in Australian television productions Mermaids, Mortified and The Sleepover Club as well as Director Evan Clarys 2003 film Under the Radar.

Simone volunteers for Meals on Wheels, distributing food to the elderly and less fortunate, and supports Act for Kids (formerly Abused Childs Trust), of which she is Gold Coast Ambassador. Polished and popular Actor, MC, Presenter and spokesperson known for her versatility and professional approach, Simone is available to add shine, style and flair to your corporate event, fashion function and television, film or radio segments.