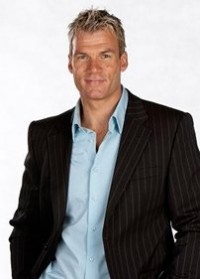 Richard Champion’s football career spanned fourteen years in total, including ten pivotal years with the Brisbane Bears/Lions before his retirement at the end of the 2000 season.

He's now the Player Development & Engagement Regional Manager for the AFL Players Association. Along with his current AFL and media commitments he has moved on to be a regular Master of Ceremonies with corporate and government organisations for conference and events.

During his career he finished in the top six places for the Best & Fairest Awards three times. He also won the Bears’ prestigious “Most Professional Player” award in 1994 and took “Best Clubman” honours in 1995.

At the conclusion of his career Richard won rarely-given, lavish praise from coach Leigh Matthews for the professional manner in which he conducted himself, having also qualified for entry to the AFL’s prestigious 200 Club. He was awarded Brisbane Lions Life Membership at the end of the 2000 season for his 10 years of loyal service to the club.

Richard also enjoyed showing off his vocal talents, or lack of them, on the hit series “It Takes Two”. His other media commitments include – television presenter with “The Great South East” and “Creek to Coast” with Channel Seven. He also co-hosts radio programmes and is a regular commentator on the AFL when the Brisbane Lions play at the Gabba.

Richard shares his experiences of life in football in a very entertaining way. His friendly yet professional manner makes him a very popular MC/host/speaker at conferences and corporate or sporting events.

Richard is an electric and entertaining speaker. His adaptability and professionalism means he is our go-to person for MC roles and guest speaker. His background in football and television presenting means that he has plenty of stories and always presents in a fresh and exciting way. Richard is always prepared for the job and exceeds expectations – we highly recommend him!

Endeavour Foundation has hired Richard or ‘Champs’ for multiple charity events. Champs is charismatic, engaging and a pleasure to work with.

Richard first came into contact with the Jetts Network in 2013 as the Master of Ceremonies for our National Conference in Fiji. Based on the success of our 2013 Conference we reengaged Richard the following year for our National Conference on Hamilton Island. On both occasions we were delighted with Richard’s effort, in particular the way in which he engaged with our 300+ strong audience. Richard was always well prepared and he was confident and humorous with his delivery. Of particular note was the way in which Richard became part of the Jetts family over the course of the Conference as he took an interest in our business and our people. Richard took on board what we were trying to achieve with our Conference and worked as an integral part of our team as he linked content and sessions and provided the flow and energy to inspire our audience.