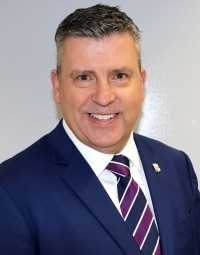 Matthew Campbell has been a prominent figure in the world of AFL football and sports media for 30 years, and is now the public face of online betting agency ‘CrownBet’.

Originally from South Australia, he was a regular SA State of Origin representative and was a foundation signing with the Brisbane Bears and a member of the club’s very first side in 1987. He played 79 AFL games in an injury-disrupted career from 1987-93, and represented Australia in the International Rules series against Ireland in 1987 and ’90.

He moved straight into the media after his retirement, and was an AFL commentator, producer and reporter with Channel 7 from 1994-2001 and with Fox Footy from 2002-2015.

He also done breakfast radio in Brisbane, worked with Melbourne-based sports station SEN, and has vast experience as a corporate and celebrity MC. He has hosted eHe hosted a lot of big boxing events, including the world-acclaimed Anthony Mundine – Darmel Castillo fight in February 2005.

From 2008-15 he was the nominated spokesman for sports betting agency SportsBet before being recruited to fill a similar role with Crown Bet late in 2015. He is also a regular member of the all-conquering and award-winning ‘Get On” show on racing.com.