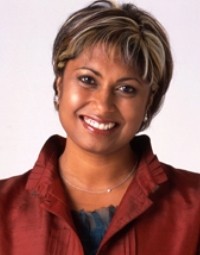 Indira Naidoo is one of Australia’s most admired and popular broadcasters. Throughout her career, Indira has hosted and reported for some of the country’s more distinguished news and current affair programs including the ABC’s Late Edition and as the anchor of SBS TV’s award-winning late night news service, World News Tonight. She has reported for and presented The 7.30 Report, The Midday Report and ABC TV’s Feedback.

She developed a cult following for her less serious appearances on McFeast, Roy and HG’s Club Buggery, Good News Week, The Glasshouse, The Fat and SBS’ Ashes cricket show Under the Grandstand with Steve Abbott. Indira was a contestant in the inaugural season of Celebrity MasterChef and has been a panelist on The 7pm Project and The Circle on Network Ten. In 2010, she appeared as the newsreader in several episodes of the ABC’s hit drama series, Rake and Rake 2.

Indira has worked as a media spokesperson and strategist for consumer advocacy group Choice and as a Geneva-based sustainability communications consultant with the United Nations’ trade development arm, the International Trade Centre (ITC). In 2009, she was selected from 2000 applicants to be trained by former US Vice President Al Gore as a Climate Reality Project presenter.

She is a member of the international Slow Food movement and has written on food and sustainability issues for The Sydney Morning Herald and Gourmet Traveller magazine, and writes the Saucy Onion food blog. Indira’s first book about urban food farming, The Edible Balcony, was published in 2011.

With her news background and beautifully clear voice, Indira is a much sought after guest speaker and Master of Ceremonies.

Indira was fabulous - confident, relaxed, informed and humorous. Our guests loved her.

Indira was flawless, MCed with such warmth and engagement and sense of occasion.

Indira was both professional and charming in her approach to her presentation. Our audience were delighted with her speech. The audience appreciation was evident by the great number of questions from the floor.