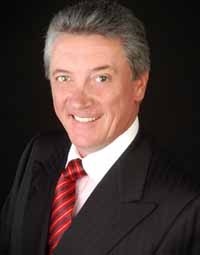 Paul Martell is a multi talented performer, who adds impact to any occasion with fast pace Irish wit and an abundant array of Hollywood impressions.

Whether he is Master of Ceremonies at a three-day conference, compering an awards presentation, creating a Hoax Character at a seminar or performing his Cabaret Show with his wife Jane Scali at a Gala dinner, Paul stands alone as the consummate professional!

Paul has been voted ‘Comedian of the Year’ by his peers on an unprecedented 24 occasions at the coveted ‘MO’, ‘ACE’ & ‘Variety Club Heart Awards’, the latest being 28th July, 2015.   Paul remains in constant demand and is still one of the busiest comedians in the business due to his ability to continually ‘re-invent’ himself, stay fresh, non-offensive and current.

In 2015 Paul was invited to entertain on the Gallipoli Centenary Cruise alongside Bert Newton, Daryl Braithwaite, John Williamson, Ross Wilson and Normie Rowe.

As a Master of Ceremonies he is continually re-booked at conferences and award dinners, he has toured Australia with for 3 years as MC /Comedian with Jessica Mauboy, Samantha Jade, David Campbell and Leo Sayer, and has recently been confirmed for a fourth year with Kate Ceberano.

He has also performed on prestigious cruise ships such as Queen Mary 2  and in concert halls around Australia with international legends such as Shirley Bassey, Julio Iglesias, Shirley MacLaine and Englebert Humberdinck.

Paul’s client base reads like a corporate Who’s-Who.  Paul has gained an enviable reputation in the corporate world as speaker, compere and entertainer, creating characters to suit the clients' requirements.

Able to work in any arena, Paul has incredible adaptability which has seen him make numerous appearances for major Corporate and Sporting events such as the AFL & NRL Grand Finals, Bledislow Cup, A League, State Of Origin, Australian Open Tennis, Formula 1, Melbourne Cup for Crown Casino and Super V8s on the Gold Coast.

One particularly special idea is Paul’s hoaxing talents. He is able to walk into a board room or a conference and fool everyone with hilarious results. He researches the company and the industry and passes himself off as an industry expert, a visiting dignitary, executive or consultant. He has appeared for the AMP Society of Malaysia as a superannuation expert, in Bali for Schwarzkopf as a hair consultant and at the Sydney Entertainment Centre for Ford as a cardiologist. And just when his unsuspecting audience take the bait, Martell lets fly with a barrage of stories, anecdotes from his wide array of hoax characters.

Paul’s hoax characters are specifically tailored to your business and his brilliant impressions of Sean Connery, Michael Caine, Robert DeNiro, Russell Crowe, Jack Nicholson and Nicholas Cage to name a few, are a highlight of his act.

Martell is the best, the comedy is topical, very funny and most importantly to our company, clean!

The evening was deemed a huge success thanks to your superb entertaining and MC skills.

You are brilliant. A lovely human being. And you always put a smile on our faces!