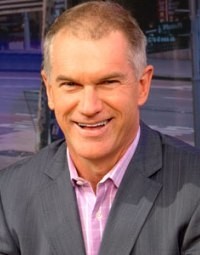 Simon commenced his career at Seven in Perth in 1979, as a sports producer and reporter. He moved to London in 1982 working with television news agency Visnews.

He joined the prestigious Beyond 2000 team in Sydney in 1987 and was a key part of the Beyond team for six years, travelling the world covering science and technology. He went on to report for the sports feature series Seasons, then onto Wild Life with Olivia Newton John and Good Medicine for the Nine network for 4 years.

A passion for Africa inspired him, along with his family to spend two years living in Botswana, where he co produced Mad Mike and Mark for Animal Planet. Returning to Australia, Simon re-joined the Seven Network, working for Sunrise.

Simon presented the popular children's television series It’s Academic for 9 years and more recently Million Dollar Minute. He has hosted The Force on Seven for the past 10 years and presented sport on Weekend Sunrise since 2005.

He was a commentator for Seven's equestrian coverage at the Athens games and the gymnastics at both the Athens and Beijing Olympics.

Simon has been an ambassador for the Australian charity, Heartkids for 14 years - since his son Sam underwent life-saving heart surgery as a three month old baby.

He is also an ambassador for the Be Centre in Sydney and Painted Dogs Conservation Inc, in WA.