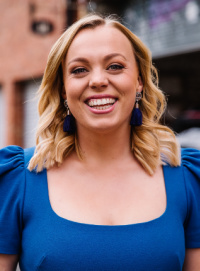 Annie Kearney is a reporter for Ten News First in Melbourne.

With a journalism degree from RMIT University, 28-year-old Annie worked her way from regional media to the metropolitan newsroom.

From crime, to state politics or sport, Annie is at ease with all types of news stories. She’s covered some major stories and events including the Lawyer X scandal, terror raids and the Melbourne Grand Prix.

A career highlight so far was working on Network Ten's 2019 and 2020 Melbourne Cup Carnival coverage as a presenter and reporter.

She is a reliable and engaging MC for corporate and sporting events and has worked for organisations including the Victoria Racing Club, Western Bulldogs AFL club and Cricket Australia.

She worked as social media manager for the Australian Olympic Committee for two years. This combined her love of sport and her enthusiasm for the drama of big events. Annie managed social accounts with more than a million fans, providing timely updates from across the world.

Her Olympic involvement culminated in two months in Rio documenting Australia’s efforts at the Olympics and showcasing Brazil to Australian fans. These experiences gave Annie valuable insights into the evolving and ever-growing world online.