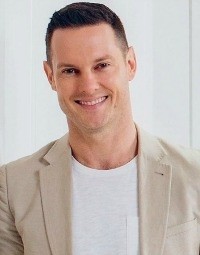 Darren Palmer is widely regarded as one of Australia’s most renowned and influential designers.

Darren began his career designing beautiful and personalised homes for discerning clients. In 2017 Darren launched his own soft furnishings and interiors range available Australia wide exclusive to department store Myer, a range of timeless luxury items accessible to all.

As a professional, Darren’s instincts and design aesthetic have influenced Australia’s design culture, while his youthful and energetic presence has propelled a public career spanning publishing, television, events, corporate engagements and leadership in design. Darren Palmer is a renowned and influential interior designer, influencer and ambassador for high-quality products and brands. His extensive expertise combined with his understated approach to design has made him a household name, known not only for his professionalism, integrity and industry expertise but also for being a trusted personality.

Darren has written for many publications, featured as a judge on award-winning televisions series and has gathered a wealth of knowledge through a very interesting and diverse career in design.

Darren has a strong passion for education and a unique ability to break down complex concepts into easily digestible materials.

As an author and writer, Darren has regularly contributed articles to a selection of Australia’s premier home and lifestyle publications. These include GQ Australia, Luxury Home Design, Renovate, Grand Designs Australia and Australian House and Garden. Darren’s interior design projects have been featured in the pages of Vogue Living, Inside Out, Belle, Design Decoration Annual, House & Garden and Real Living, and he was named one of Men’s Style Magazine’s Men of Influence in both 2014 and 2015.

Darren is also a regular columnist for domain.com.au, where 3.9 million readers see his articles every month.

In August 2014, Murdoch Books published Darren’s first design book, Easy Luxury: An expert guide to creating your perfect home. The purpose of Easy Luxury was to bring high-end design within reach for everyday homeowners and to make great design accessible for everyone.

The first edition of Easy Luxury sold out within four months and was reprinted in March 2015. In 2016 Darren also released his highly-anticipated second book Homespace: Changing the space you have into the home you love.

Darren’s television career began in 2009. During this time, he has held a number of roles as a judge and presenter on popular home and lifestyle shows including Nine Network’s Reno Rumble and 4 times “Best Reality Program” Logie award-winning The Block.  The Block is the most successful series on Channel Nine and is the No. 1 non-sports program. It is now in its 14th season - Darren is back on The Block at primetime, 5 nights a week in the second half of 2018.

From design symposiums to public and corporate events, Darren Palmer is also a sought-after public speaker, MC and presenter at events for brands and institutions including Audi Australia, LG, Hafele and Carpet Court using his lively and entertaining style to bring the topic and event to life.