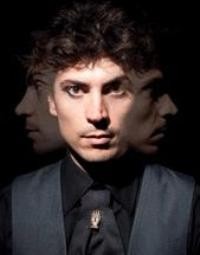 Adam Mada couples ten years' experience as a professional magician with an edgy wit to create provocative, astonishing and sophisticated shows. His reputation for mind-bending magic has his performances - ranging from spectaculars at the Sydney Opera House to intimate parlour shows for well-heeled clients - in international demand.

Adam's elite circle of clients include: Kerry Stokes, the Spanish Ambassador, Brian Eno, Tara Moss, Lote Tequire and the Joyce and Agnew families. In 2009, Tara Moss based an entire character in her novel 'Siren' on a performance by Adam, and called on his expertise when researching technical aspects of the Australian best-seller.

His custom visual effects and magic have also been employed for commercial marketing campaigns, including the 'Zero Reality, re-Launch of Coke Zero' 2008 tour, and Stoneleigh Wines 'Magic of the Sunstones'.

Film and television highlights Adam starred in 'The Real Hustle', an eight-part reality show for Channel 9. The program saw him expose elaborate confidence scams alongside Nicholas J Johnson and Clare Werbeloff. The show went to air in Australia in 2010 and was featured on BBC3 in the UK.

In early 2010, Adam consulted on Australian feature film 'Sleeping Beauty', starring Emily Browning. Adam created an original illusion for the key opening scene that replicated the visual effect of a Bronchial test. Adam created and performed a set of memory tests for ABC Television's teen science documentary 'Whatever'. Working with leading neuroscientist John Currie, Adam invented visual and stunning conjuring demonstrations that exposed the dangers of binge drinking. During the birth of video podcasting, Adam directed, wrote and starred in an original series of shorts called SLEIGHT. The series was successfully distributed through itunes and ran on television network TVS through 2009. In the series, Adam brought his original, contemporary magic to the streets, performing diabolical enchantments on passers-by.

Adam's deeply conceptual and creative magic draws him to regularly collaborate with other artists, notably Kathryn Gray and Carol Barroso. He teamed up magical 'nemisis' Richard Vegas to launch the critically-acclaimed 'Mada vs Vegas - The Dueling Magicians'. This sell-out show toured some of the most prestigious venues in the country, including the Sydney State Theatre, Palms at Crown, Adelaide Convention Centre, Cockatoo Island and the Tivoli. It has also received artistic acclaim for its originality and world class sleight of hand.

He has held long residencies as chief magician at Sydney cabaret venue SLIDE since 2007, and Tharens Manor since 2008. He has also worked at Sydney's IVY and De-Nom's as resident magician. Adam is the only Australian magician to complete the world famous Jeff Mcbride Masterclass in Las Vegas with Eugene Burger.