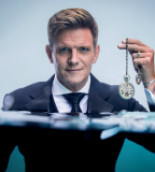 Master Hypnotist, and Magician Anthony B Laffan combines over twenty-five years of international performing experience with professional showmanship to provide audiences with an unforgettable hilarious hypnosis show. His energetic stage personality and modern approach to hypnotising have made him one of the most sought-after comic stage performers as well as one of Australia's most established corporate close-up magicians.

Anthony B Laffan is a world-class entertainer who has performed all around Australia, USA, Europe, Asia and the South Pacific. He has an unbelievable ability to get inside the minds of others, using his finely-honed skills of psychological principles, intuition and hypnotism to entertain entire audiences.

In Anthony's comedy hypnosis show, members of the audience become the stars of the show. With his playful handling of spectators, Anthony has the audiences in stitches yet at ease without fear of embarrassing his volunteers.

As a roving entertainer, his Close-Up Magic is perfect for cocktail functions, pre-dinner drinks, weddings, social or business functions. Anthony's light-hearted approach to magic, combined with his countless one-liners, makes for a great event of laughter, amusement and amazement.

It is no surprise that he has been the opening act for Billy Connolly on his Australian Tour. He regularly provides entertainment for corporate companies, casinos, hotel groups and luxury cruise lines.

Anthony B Laffan's shows are always entertaining and intriguing - whether pubic shows or private corporate shows – his audiences and clients are never disappointed. Anthony uses his warm personality to create a connection with the audience and volunteers, making a fun night of hilarious and mystifying experiences.

Anthony was exceptional and engaged everybody extremely well, he was a TOTAL hit. We look forward to using you again and again.

Anthony is a very personable man with an infectious sense of humour. His affable personality and immaculate presentation compliment his professional expertise...