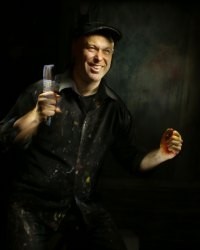 Brad Blaze the speed painter, may just be the fastest painter in the world. He paints large portraits of iconic people, celebrities and CEO's generally in about four minutes on a spinning canvas. During his performances, he has uniquely combined audience participation and magical illusions with his speed painting. There is no other show like it. With audience members on stage his shows can take on a whole new level of comedy, whilst for formal events a magical illusion such as a flash of fire can amazingly reveal a company logo or by throwing glitter on to a glue painted canvas can reveal a CEO or award winner.

Brad Blaze is a world-class entertainer and has headlined corporate entertainment painting prime ministers throughout Australia, New Zealand & the Pacific Islands, speed painted celebrities and CEO’s in Asia and enthralled corporate audiences in the USA.

What also really sets Brad’s shows apart from other entertainment is the option of comedy audience involvement. Willing audience guests may find themselves on stage mimicking Elvis dance moves, answering trivia on an iconic person or moving like Michael Jackson.

With his outgoing personality, Brad ensures it good clean fun. If you are after a unique, high energy, creative and exciting show for your corporate or public event, product launch or special event, Brad Blaze can deliver an experience you won't forget.

Brad is also available to MC your event or provide roving caricatures in addition to his show. He also provides a keynote on the topic of team transformation and can combine this with a creative and interactive planning and drawing team building session.