The Chantoozies Travels from Melbourne, VIC 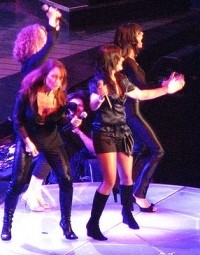 Australian Pop Group, The Chantoozies, are back on stage and wowing audiences around Australia with their vocals and sassy style. Most recently the girls (Tottie Goldsmith, Eve von Bibra & Ally Fowler) travelled to Adelaide to perform alongside Leo Sayer, Mondo Rock, Uncanny Ex Men and Pseudo Echo at the Adelaide Clipsal 500. Originally The Chantoozies formed for a one off show and, after an overwhelming response, won their first residency at the renowned Melbourne Underground nightclub. The band found management with ex-Australian Crawl member Brad Robinson. A record deal followed with Mushroom, then Peter Faiman of Crocodile Dundee fame directed their first film clip Witch Queen of New Orleans.

The Chantoozies toured Australia extensively with their first and second albums. The achieved great success with their original material - 'Wanna Be Up', 'Kiss and Tell', 'Walk On' and covers of 'Love The One You're With' and 'I'll Be There' - all Top 40 hits. Throughout the 80s and 90s they shared the stage with many of Australia's biggest acts, including Noiseworks, Boom Crash Opera, James Reyne, Darryl Braithwaite and the Hoodoo Gurus.

As well, they supported international act Billy Joel for an Australia-wide 38 show tour. After taking time out to pursue their individual careers the girls united for 'The 25 Years of Mushroom Magic' at the MCG, then followed Molly Meldrum and Michael Gidinski's national 'Countdown Spectacular' tour and numerous corporate gigs.

The Chantoozies are very excited to be back performing and doing their 'thing'. In the words of Billy Joel, "Together you girls make one hell of a woman", and in the words of Hey Hey's John Blackman, "But can they cook?"!

Eve von Bibra has flirted with acting over the years; her most memorable role was playing the love interest (Jacki the air hostess) in Shane Jacobson’s hit film and Channel 10 series 'Kenny'. Evie is a songwriter co-writing Chantoozie hits 'Wanna Be Up' ‘Kiss and Tell’ ‘Walk On’.

Evie also tours with bands such as Absolutely 80’s Brat Pack with Brian Mannix and Scott Carne, tours with The Models and the Super Models Orkestra. When not writing songs, she is writing stories for children.

You will probably know Tottie Goldsmith best from hosting TV series Sex/Life or co-hosting TTFM breakfast radio. She did a national tour with 'Grease' The Arena Spectacular then played Janet in the Sydney season of The New Rocky Horror Show & The Vagina Monologues. Tottie played opposite Denis Waterman in “Don’t Dress For Dinner’ and stared opposite Jeffrey Rush in Brian Browns 'Twisted Tails'. Tottie has guested on most Australian series including Neighbors, Blue Healers, Satisfaction and Stingers. Her most recognised role was in Underbelly’s ‘Infiltration’.

Ally Fowler is probably best known for her role as Zoe in Sons and Daughters. Ally has chalked up her fair share of ‘walking the planks’ in productions such as David Williamsons  “Let The Sunshine In’ & The Little Dog Laughed. Ally also did a season touring The New Rocky Horror Show’ and had guested in series such as All Saints, The Secret Life of Us & Sky to name a few and most recently in “Wentworth’. Ally has just completed a David Williamson Trilogy.