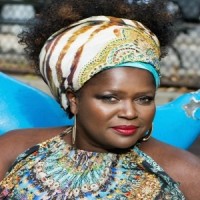 Lisa Hunt began singing in that great African American tradition, the gospel church, there was laid the foundation of her soulful singing style. She went on to study voice at The City College of New York.

As a singer and songwriter Lisa Hunt has enjoyed amazing success across the globe with her powerful voice belting out the best of Motown and Rhythm & Blues. Her deep soulful voice has been labelled ‘an experience not to be missed’ In Italy she has been the featured vocalist on tour and recordings of Zucchero Sugar Fornaciari for over 15 years and has worked with a range of artist from Pavarotti to Ray Charles.

In Australia Lisa has toured and recorded with Jimmy Barnes, Deisel, Radio Freedom, and Johnny (B.Good) Johnson. Lisa recalls, “I had the honour of being invited onstage with Midnight Oil”. Lisa's debut album was A Little Piece Of Magic for Polygram. She has had songs on numerous compilations around the globe, both as singer and songwriter and combined has sold more than a million records. Strange for someone you've probably never heard of until now, but hey, that's showbiz!

Lisa Hunt has a fantastic repertoire of songs, including lots of old favourites by Wilson Pickett, Aretha Franklin, Otis Redding and The Supremes. She has a great knack of really involving the audience in her performance and she has a voice that is simply awesome.