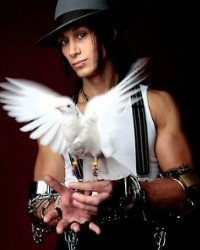 Cosentino is now firmly established as one of the biggest and most popular entertainers in Australia. Winner of the 2013 International Magician of the Year, he shares the title with past recipients the likes of David Copperfield, Criss Angel and Penn & Teller.

In his own unique and award-winning style, Cosentino fuses traditional sleight of hand magic, grand illusions and physical demonstrations into cutting edge presentations. He escapes the boundaries of the past and performs the most original and progressive effects witnessed today.

Considered an entertainment pioneer and the catalyst for the resurgence in magic's popularity in Australia. Cosentino’s original and innovative presentations have earned him the respect of his peers and clients alike. A pure showman… his productions are amongst the most powerful, riveting and sought-after in the entertainment industry today. They have been featured on TV shows and sold out tours. A performance by Cosentino is an entertainment spectacular! An evolution in the art of Illusion.

Cosentino was the first Australia magician in history to have his own prime-time television specials on commercial television. He has now written, produced and starred in 4 top rating specials, viewed by over 6.1m people nationwide. These shows have now been broadcast in Spain, India, South East Asia, New Zealand and Latin America.

He has already achieved what many performers have only ever dreamed of. Three times Australian Award Winning magician, a Guinness World Record contributor and a nominee for the prestigious Helpmann Awards. The Helpmann Awards (TONY Award equivalent) is the pinnacle industry event for Australia’s performance industry, recognising the very best in live performance. Cosentino was also Runner Up on Australia's Got Talent 2011 and Winner of Dancing With the Stars Australia 2013.

Cosentino executed a dangerous underwater escape at Melbourne Aquarium, which gained national and international attention haling him as the 'Heir to Houdini'.

His commanding stage presence and enigmatic personality, combined with impeccable technique, has set him apart from the ordinary performer. New York’s, Wall Street Journal has featured him as a stand out talent and he was one of the youngest headline artists to ever perform on the famous Holland America Cruise Lines.

Even the directors of the world renowned Cirque du Soleil have shown a keen interest in his unique and varied performance skills and have marked him down as a potential artist resource.

The Cosentino stage show is world-class entertainment and part of the reason why he was recently awarded the title of 'International Magician of the Year'. Mirroring his award winning theatrical performances, it features Cosentino's iconic illusions and magic demonstrations, coupled with cutting edge dance routines, heart stopping escapes, audience participation, mentalism, humour and many surprising twists & turns. A stage show from Cosentino is guaranteed to give the attendees a function they won't forget.

I am amazed for the first time in my entire life.

Cosentino is taking magic to a new level