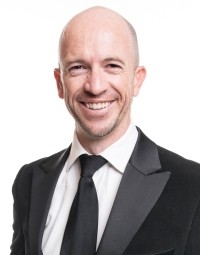 After graduating from Canberra University with a BA in Advertising and Marketing, Gary decided comedy was his calling. In the past 14 years he has experienced a huge amount of success performing across Australia and overseas, including the Melbourne, Sydney and Edinburgh Comedy Festivals.

Gary is very popular in the corporate arena, where he regularly MC’s and/or provides after dinner comedy spots. He is also an accomplished writer, actor and film director.

Gary co-wrote and co-directed Happy Feet Two (as well as voicing characters), won Tropfest with his short film, The Money, and was nominated for an Aria for his comedy album, The Hollywood Motel.

Gary co-wrote and featured in the cult Aussie flick You Can’t Stop the Murders and also appeared in Mick Molloy’s Boytown. He co-wrote and performed in a sketch comedy series for Foxtel’s thecomedychannel and has also appeared on The Footy Show and Good News Week.

Besides being an MC and providing comedy routines, Gary incorporates humour and wit to deliver an informative and motivational keynote speech that is refreshingly different from the rest.

Gary specifically tailors his material to suit the company and occasion. In his entertaining keynote, Gary talks about the trials and tribulations of becoming a stand-up comedian.

From the humiliation and pain of getting booed off stage to the elation of receiving his first paid gig, even if it was for only ten bucks. Gary points out that to succeed in stand-up comedy is no different to succeeding in any other profession. The requirements are the same: PASSION, PERSEVERANCE, DISCIPLINE, CONFIDENCE, KNOWING YOUR AUDIENCE and of course, a SENSE OF HUMOUR.

Funny, funny man. Judged the audience well and held their attention throughout dinner. We will definitely use him again.

Fresh, funny, original and he's not even from Melbourne!