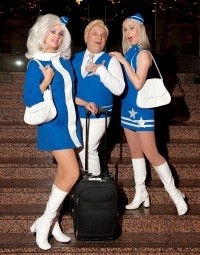 Lesley Hancock is the fearless leader and major conceptualist behind Divas. She has been the leading lady in every major musical in the last decade including: Phantom of the Opera, Les Mis, Chicago, Sweet Charity, Funny Girl, Grease and Sweeney Todd, all of which she has rewritten, restaged and given herself the starring role. No wonder then that she has been one of the most creative forces on the corporate entertainment scene in Australia over the last ten years both in Australia and internationally.

With an extraordinary talent for tailoring and impeccable comic timing teamed with some of the biggest stars in the business, the Diva’s Shows are a class of their own. Her incredible and always humorous portrayals of famous people (Rose Hancock, Princess Diana, Ab Fab’s Patsy, and her ever popular Kath from Fountain Lakes) never fail to leave a mark on her clients.

The Shows bring together both Lesley’s unique talent for parody and a team of fabulous Divas suitable for any occasion… whether it’s a high powered corporate lunch or awards night Lesley and the “girls” are sure to entertain and impress!

Come Fly with Me - Your company is so successful it now has its own airline! “Fasten your seatbelts it’s gonna be a bumpy flight!” - upgrades, downgrades and inflight entertainment!

Pats & Eddie - That Ab Fab duo are back better than ever! Mix and Mingle, fashionistas and they even sing!!

The Priscilla Spectacular - The Priscilla Spectacular is 30 minutes of fabulous, sophisticated glamour that brings to life the colour, flamboyance, fabulous costumes and songs of the disco era featured in “Priscilla Queen of the Desert.” The show, performed by three or four of the best drag divas in the business, is a mix of live and mimed music and a mix of solo spots and fabulous dance routines.

Kath & Kim - Due to public demand Diva has taken on those hornbags from Fountain Lakes! Yes, Kath & Kim have hit the corporate scene big time promoting their latest show The Devil Wears Supre.

Fashion Police - Donatella Versace and Helmut Snapper. These two high camp guests will work the room and entertain your guests with all the latest gossip and info on every celebrity living and dead. Donatella with her new “Cougar Collection ” of everything glitz and glamorous from sequin scarves wraps and ties to belts and top hats will show the latest Versace trends while the infant terrible Helmut Snapper plays papparazzi. Tailored song by request for your event and photographic opportunities by the score!

PSYco, Gangham Style - Derrick Kim is amazing. He travels the world and everyone thinks he's the real deal! Psy sings live and gets your guests up to learn the "Horse Dance".