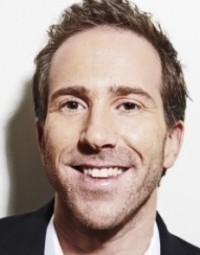 Adam Rozenbachs - stand-up comedian, writer, broadcaster and ventriloquist dummy disliker - has steadily risen to become one of Australia's funniest and most consistent performers, writers and broadcasters.

Adam is a regular of the Melbourne stand-up comedy circuit, performed around Australia, and supported Dave Hughes and Adam Hills on national tours. He has also become a regular on Spicks & Specks, as well as appearing on Dave Hughes’ Handy DVD, Mick Molloy's The Nation, Rove [live], The Comedy Channel's Stand Up Australia and Headliners, 9AM with David & Kim and ABC1's Sunday Arts.

Adam also MCs and provides corporate entertainment, and has done so for such companies and events as Optus, Animals Asia Foundation, The Victorian Labor Party, Noodle Box, Heinz, Nova and the Great Grand Final Comedy Debate for the Essendon Football Club’s Women's Network, in front of such dignitaries as AFL CEO Andrew Demetriou and AFL Chairman Mike Fitzpatrick.

As a writer, Adam is one of the most sought after in the country. He currently writes for the ABC’s Adam Hills in Gordon Street Tonight and Before the Game [Network Ten's highest rating football show] and was a writer for the first of years of ABC favourite - and Logie winner - Spicks & Specks. He has also written for Mick Molloy's The Nation, Skithouse, Comedy Inc., The Big Bite, Between the Lines [yes, all three episodes!] and The Logies. In print, Adam was a regular columnist for the Herald Sun, as well contributing to The Sunday Age, Men's Fitness, and Crikey.com.au amongst others.

And when he's not doing all that, Adam is also a broadcaster on 774 ABC Radio, co-hosting regularly with Lindy Burns, and Saturday Night Spin on ABC Grandstand's coverage of AFL football. Adam has also appeared regularly with Hughesy and Kate on Nova 100, and was a weekly guest of Robbins, Stilson and Molloy on Triple M.

He was a nominee for Cleo Bachelor of the Year, making the top fifty. And no, it doesn't matter where he came... let's just say equal second, shall we? We shall.

Rozenbachs gave the packed house every reason to be cracked up for the best part of an hour. His take on life as a single, then with a girlfriend, and then single, and then possibly with a girlfriend before definitely being left alone, was a hoot.

...Adam writes jokes like the rest of us breathe...