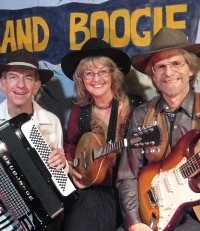 Australiana Bush Dancing music at its best. Bushland Boogie has been present on the bush dancing scene for years. The concept was to evolve as one of the best, most high powered, contemporary Australia Bands ever to hit the Australian bush dancing circuit. Having performed countless shows and the band members have the experience and confidence to perform for up to three and four hours of music for your listening pleasure.

The band is noted for its expertise in musicianship and outstanding vocal arrangements. The music they perform is based on Australiana songs, Bluegrass, Country Rock, Rock and Rock & Roll, they also assist with bush dancing instruction. With such versatility Bushland Boogie caters for a range of audiences of all ages. They also actively encourage audience participation wherever possible with a touch of fun thrown in.

They are perfect if you are looking for Aussie and Country ballads during Dinner… Or for some Bush Dancing after dinner, (with instruction)… And later in the evening, enjoy some classic Pop and Rock Eagles, Daddy Cool, Dire Straits, Men at Work, Creedence, Paul Kelly…

The band consists of:

Bushland Boogie played at our Bush Dance last Friday night and our team were overjoyed at the ease with which our community engaged with each other, all because of the encouragement and great musicality of Maggie, Tim and Bob. The event was a huge success and I attribute this to the warmth that came from having a great live band. Without hesitation, I would recommend Bushland Boogie to anyone and we have already decided to invite them back next year! Thank you Bushland Boogie for making it a stress-free event!

What a hit last night!!! Thank you so much for helping make this weekend a HUGE success. Your bush dance really brought families together and created life long memories for over a 1000 people.