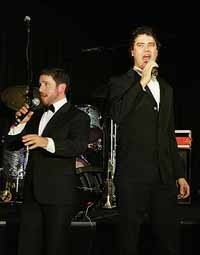 Adding an extra dimension to a powerful vocal demonstration, Tenors Undercover is a highly entertaining, intricate hoax tailored specifically for each and every client. It is sophisticated, interactive and appeals to a wide range of audience.

From the creators of The Three Waiters®, Tenors Undercover® officially starred at the G20 Summit in Brisbane, 2014. What an honour it was for Tenors Undercover® to be chosen by the Australian Government as the feature act for the opening dinner. Masquerading as an 'International opera star', a 'VIP seated guest' and a regular 'sound engineer', the three performers had the 160 high profiled audience members, laughing, clapping and enjoying rousing renditions of classic pieces including Music of the Night and Nessun Dorma.